A sport in which players are located on opposite sides of a space separated by a net and throws the shuttlecock over the net with racket strikes, trying to “land” the shuttlecock on the opponent’s side and, conversely, not to fall on their own field. Two players or two pairs of players compete (couples can be not only of the same sex, but also mixed – a man and a woman). 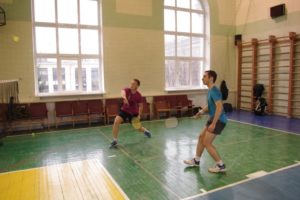