Basketball is an olympic complex coordinational sport which provide harmonic development of a player. A sportsman cover up to 7 km, execute up to 150 boosts and as many jumps during a game. He pumps over his all main functional systems, develop his endurance, his ability operatively evaluate a situation, instantly make a decision, an ability to interact with other players, an ability to fight till the end, an ability to control oneself, an ability to support his partners. It is a whole world hidden on a basketball playing field! There is the basketball section in which students and teachers play in KNURE. Training for students take places in two types of basketball groups. Every student can start trainings without prior preparation and receive basic skills or increase existing basic level, take part in contest among groups, faculties, hospices etc in specializational basketball groups. You will be able to defend the honour of our University on municipal, regional and All-Ukrainian contests in sport development groups. Basketball is more than just a game. It’s a life. It will carry you. It will make you heart to beat faster. It will give you a joy, new friends, vivid emotions, might, self-reliance. It will make your life saturated. It will show you new verges of yourself! We invite everybody to join our big basketball team of KNURE! 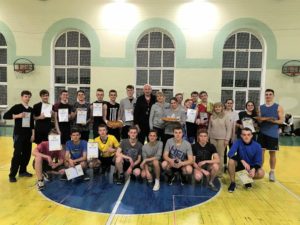